Ms King was joined by Richard Gardner, The Independent’s Education Editor, and Joshua Oware, the Research and Community Affairs Co-ordinator at Rare Recruitment.

The discussion was prompted after new research, published today, from the London School of Economics and Political Science highlighted that university applicants from non-mixed ‘race’ minority groups were significantly less likely to be offered a university place compared to their white British counterparts.

These finders were consistent even after taking into account academic attainment, family social class background, sex and the type of school attended. 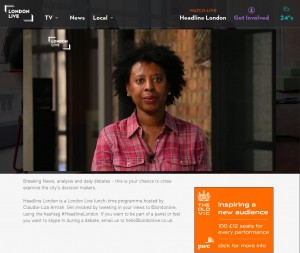 Presenter Claudia-Liza Armah challenged her guests to explain why these findings exist.

Mr Gardner highlighted a key difference between what the media has been reporting and what this report has found. More black and ethnic minority students are applying to university, he said, but while the “numbers [of students] may be higher, the percentage is still low. Something needs to be done to address the balance.”

Ms King pointed out that she was not surprised by the findings saying that from her work at African & Caribbean Diversity she has found that, “Black and ethnic minority students tend to get their grades first and then apply rather than apply on their predicted grades for this reason.”

Mr Owore highlighted that while these challenges do exist for black and minority ethnic students, universities are trying to address these problems. “Universities are spending more and more,” he said. “You can attend more summer schools…they are not only trying to recruit you, but show you pathways to enter university.”

But Ms King pointed out that while that may be true, problems still exist specifically for Black students.