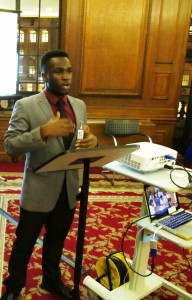 After finishing his A-Levels, he took a gap year and volunteered with a charity called City Year London.  During his time volunteering, the organization was recognized with the Best Team Award from vInspired for their efforts mentoring and tutoring students throughout London.

Olukayode is currently studying medicine at St. George’s University of London and hopes to one day become a pediatrician.

In his spare time, he is a triple threat, playing the guitar, dancing at his university, and singing in a medical student Acapella group called  “One Dissection.”